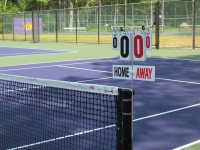 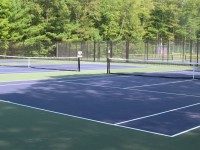 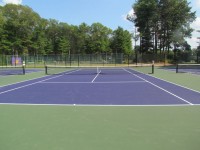 The Wheeler School itself is located close to Brown University in Providence, RI, but due to its urban location they have an off campus athletic complex in neighboring Seekonk, MA. The school hired Cape and Island Tennis & Track to reconstruct 6 of their 8 aging asphalt tennis courts in post-tensioned concrete.

That area of New England tends to have a lot of rock and ledge and this site was no different. There were challenges in excavating and leveling the site but the final product was one that everyone agreed was spectacular. The older courts were a traditional dark green, but we switched the new facility to a purple and gray combination to better represent Wheeler’s colors.